Small successes are better than no successes. (And yes, I spelled my own name wrong over at catholicmom.com.)

1) I had a very productive morning, even if it got off to a slightly later-than-usual start. Fingers were flying. Words knocked out in cohesive sentences. And I made a run to get some summer clothes for a south-traveling kid-o-mine who has nary a thread to wear from last summer.

3) Just as I was starting my van to head to teach children’s choir, I did a mental survey of the farewell conversation I had with my 11-year-old. In my mind’s visual super-slo-mo playback, I realized that while I was packing music, he was cutting open an entire package of bacon and putting it – as one big overhanging hunk – on a salad plate. Wait. I thought. What the heck is he going to do with that?

Success! I ran inside, cut the impending action and prevented the gory greaseshed – and one serious microwave (hot) mess.

This lovely artwork was Henry’s Christmas gift to me. He made it at the famous Pewabic Pottery center in Detroit. Yes. It says bacon. And Tea. Because he loves bacon, and I love tea. Except he spelled tea wrong. Which he knew, but “there was no turning back once I gouged it in the clay.” That’s my boy: The bacon-loving clay gouger. 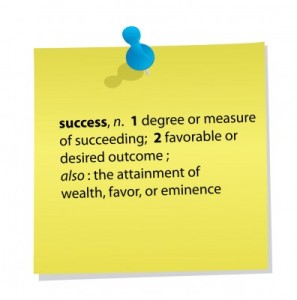 Today is Small Successes Thursday over at catholicmom.com – a gentle reminder not only to not sweat the small stuff – but to celebrate even the smallest successes over the past week – because they add up. So, here’s what I’m celebrating. (One of my successes should be that I’m actually participating in this, after a slow recovery from the first time I did – which was a catastrophe.)

1) Although I contemplated removing my high heels during mass and chasing full-speed ahead and barefoot after my three-year-old track-star of son as he ran laps up, down and across the aisles in church, as the prayerfully giggling congregation was preparing to receive communion …

I kept my shoes on.

I stood patiently and (may I add) rather calmly and only watched in horror as he dodged every outstretched hand and turned on his heels to run the other direction. Again and again. This almost counts for a two-fer, since I didn’t holler, “Get that little *&@%$!” That, my friends, is success. (With a dash of decorum, I might add.) And a special public-thank you goes to the brave usher who finally nabbed Cliff, legs still treading air. 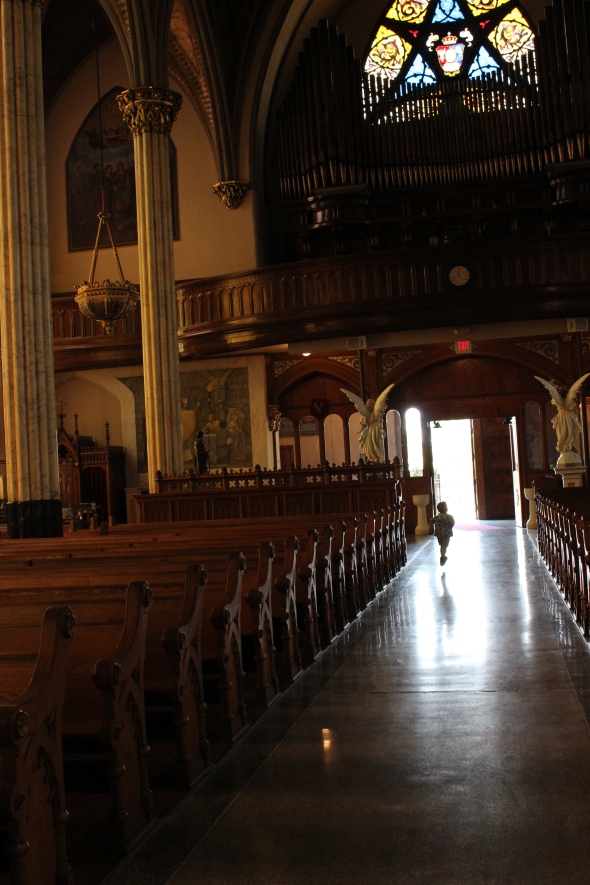 Go Dog, Go! This is what Cliff looks like running in church. Not our church, but an exceptionally lovely one, just the same.

2) Three times in this one week, I thought about what to make for dinner BEFORE my kids were crying that they were so hungry they were going to die. (AND, I didn’t remind them that they don’t even know what hunger is.) 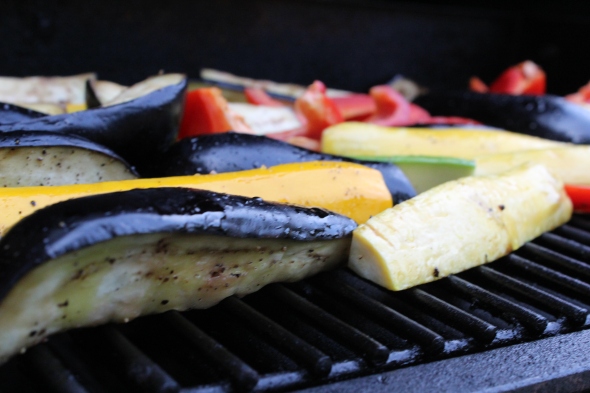 Grill food, Grill! This is was food looks like. On my grill. Food I cut. With a sharp knife. I know. Impressive.

3) And, I actually caught at least glimpses of three of the six races my kids were swimming at their meet last night. I missed the others because I was busy yacking on the pool deck. (Sue me, I’m desperate for adult conversation.) But if parenting was baseball, I’d be batting .500 and earning some serious cash. Cabrera’s average for 2011 was .344 and he raked in $20 million last year. I figure my average earns me a pedicure. Or a Snickers. Or a lick of a lollipop. Or something.

Swim Henry, Swim! This is what water looks like. When Henry is swimming in it. I know, it’s a stupid picture. But that is actually Henry swimming the fly. Not that you could even tell that.

So what’s your success? (I, obviously, cannot include good swimming photos in mine.)

Here are my Thursday Small Successes, linked to Chocolate for Your Brain. Drum roll, please?

The deal is to post this on Thursday. But it’s one minute from Friday … and I’m not going to make it … so that’s not going to be on my success list. But I DID do these three small things.

And now, I link this to Chocolate for your Brain. For reasons that I’m not quite clear about.

1. What a piece of junk this thing turned out to be. 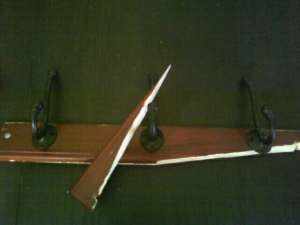 Off the wall. Literally.

Sure, my children have proven many times that this Home Depot special could hold more than a dozen bath towels and a couple robes at once. (Never mind that you could barely fit down the hallway.) That darn thing couldn’t handle simple a one-handed, pommel-horse-style mount from a nine-year-old boy? Gee. Henry only weighs 55 pounds, and he wasn’t even running at FULL speed. Hmph.

1. “I see T-Rex. I see bird. I see dinosaur.” Said the boy who doesn’t speak! Yessss. Of course, at this age, Lillian could identify a hexagon over an octagon by name (although the shapes were the same color) and knew a parallelogwam from a twapaziod. BUT she sure couldn’t scale the cabinets to get on the counter in less than 30 seconds or bean you in the head with a matchox car from across the room. We all have our strengths.

3. Some sacrifices are chosen for us. Some we have to make. And most all of them bite.

4. Whatever was stuck on Lillian’s bedroom doorknob yesterday is growing. I think I’ll need a chisel.

5. If you haven’t read Simcha Fisher’s blog. Do. She’s hilarious. And good.

6. Next week can’t come soon enough. I am looking forward to a fresh start.

7. There is no other acceptable version of this song.

I may be changing my superhero name to IRONic MOM.

Irony is sorely misunderstood. Take poor Alanis Morissette. She devoted an entire song referring to events as ironic, which were all really just bad luck. Rain on your wedding day is a bummer. Not ironic.

So, for those of you who need a little refresher on irony … ta da. IRONic MOM to the rescue.

Posting on your blog your three small successes of motherhood (yesterday’s entry) while your 22-month old is right over your shoulder sweetly singing as he is emptying (decoratively, mind you) an entire bottle of syrup on the leather chest and carpet.

Now, after your try to quickly (which with syrup is impossible) clean up the mess then scramble to get everyone in the car to pick up the older kids and you pick up that same 22-month-old darling and he pukes on you, THAT is just plain bad luck.

Got it? Happy to be of service.

After my last few posts of what a nincompoop I am, I’m here to post a few small successes. That’s a regular Thursday feature at Faith and Family Live. There is a little graphic, but linking to it is not one of my small successes. But wait, today, I’m focusing on the glass being half full…

1) This morning, I matched plastic lids to plastic containers and threw out (recycled, actually) the leftover oddballs, all while Cliffy napped. I got rid of enough to fill a Target bag. Yield: A Target bag full of space in my cabinet AND containers that will actually be useful!

2) I remembered one of the haiku I made up while up with the baby last night. I count syllables/sounds (or “on”) in my sleep instead of sheep. Stupid? Yes. But keeps my brain at just the right level of occupied and bored. Otherwise, I’d get up and start typing.

Notice my nuanced reference to season? As in my season?

3) I stopped the baby just in the nick if time BEFORE he was about to put M & Ms in  the heat vent (to which he pried the grate off).

Those little things DO add up: More space in our crowded house. Feeling slightly creative AND not cleaning up melted chocolate. Score.