That’s the nice thing about a blog. It’s always waiting here for me to tell a story or two.

My grandpa Dewey always said, “Come again, sometime.” We thought it was pretty funny, because often he said it a) when you were no where ready to leave, or b) when he was visiting at my mom and dad’s house.  It was always worth a chuckle. Now that phrase has become a staple of our lives. My dad always says it when we part. Just for the fun of it. And whether consciously or not, my mind and heart focus on my handsome (and unique) grandpa Dewey.

This weekend, Richard was cleaning out our front coat closet. I saw he had moved my grandpa’s beat up old cane that I have kept, since his death, on the rail in the closet. First at our condo, then our old house and, for the past five years, here. I reminded Richard that I like to see it.  He told me it was cumbersome with the limited space in the small closet. We left it at that as I was distracted by some other activity.

This morning, when I went to get my coat, I saw this. 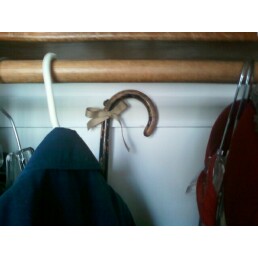 It’s moments like this that remind me how blessed I am that my husband knows my heart.

I think I’ve been fooling myself that I am sort of a successful parent. My kids are competent, generally well-mannered, somewhat conscious of personal hygiene, often thoughtful. And it hasn’t been without a great deal of effort on our part. We even reminisce, “Boy, that Mary Claire sure gave us a run for our money as a little one,” or “When he was five, Henry’s energy level was right off the Richter scale.” And, of course, we’re still cutting our teeth with all-things-crazy, keeping up with Lillian’s imaginary universe…

… but then there is Cliff. 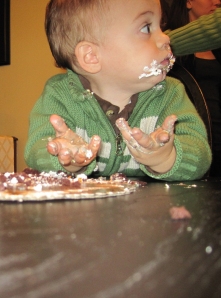 By now, I feel like I should be able to blog about some success story. You know, how we taught him to stop hitting us and whipping hard and heavy objects at our heads. But, I’m embarrassed to say, we’re not anywhere near there.

Yes. I know he’s only 19 months old. But I thought we’d turn some sort of a corner and at least see some improvement. The only improvement is in his aim. Which is freakish. We’ve pretty much stripped the play area and house of blocks, trucks, cars, anything that may draw blood on impact. (Learning today that books are also on that list, since he whips ’em like a Frisbee. Bam, right near Henry’s eye. Yikes.)

We bought a bin of light-weight balls hoping for less damage. Yes, he throws them,  but not with as much satisfaction, so he’ll quickly move on to canned goods or something weightier. I found some heavier Nerf-type foam balls. Those are okay. But a little big, also not as satisfying.  And I’m afraid he’ll bite them. We finally came up with the idea to make small polar-fleece bean bags, with a little stuffing for head-and-face cushioning. They offer a little weight but soften the blow (just in case).

We’ve been trying to teach him what he can hit (a punching bag, a pillow, a blow-up bop bag) and what he can throw and where he can throw it (you know, like not at my head or at the TV). He’s already dented the fridge, the stainless garbage can.  The walls. The dishwasher. My ego.

Setting him up with stuff he can hit and throw feels counter-intuitive to our parenting style. We would really like to teach him NOT to throw things and not to hit altogether. But Richard and I have discussed, that it seems as though he actually needs to swing that darn arm. He spreads out his legs, cocks that arm back and gets ready to let it rip. Maybe a hundred or more of times a day. If his hand is empty, he swings it at something (or someone) and hits it, if he’s got a grip on something, he aims at a target, swings his arm back and ka-pow. You’d better duck. Nine out of 10, your battleship is sunk.

So, since the time-out trick is generally useless at this age, after a non-regulation hit or throw, I pretty much have to sit down at that moment and hold that little anaconda in my arms in sort of a human straight jacket for a minute or two. I calmly tell him not to hit or throw ____ at ______.  And if a human target was involved, instruct him to “apologize” (which, for him, is a sweet lovey head lean/cuddle). All this stopping makes for very productive days.

The good news: the hitting and throwing doesn’t seem to be rooted in either malice or aggression. (That isn’t to say he doesn’t glean some satisfaction from the whoops and wails that follow after he’s clobbered an unsuspecting bystander.)  The bad news: I’m exhausted and, wait, (did I mention this?) pretty much feel like a completely incapable idiot.

Case in point: Tonight after dinner, I presented Cliff with his milk, and in a fake-out reach, he cocked his arm back and clubbed that sorry plastic green-lidded Toy Story cup out of my unclenched hand and clear across the room, smashing it into a wall. And here’s where the idiot part comes in, I should have known.

From the other side of the dinner table, my dear spouse looked at me and calmly recommended that perhaps I leave the house for a little while. Then he added a sympathetic, “If you don’t come back, know I’ll be sad.” Then he glanced at Cliff, “But, I’ll understand.”

St. Monica. Pray for me.

Like a DVR or cable system, it would be nice if I could digitally save myself to be called on later or available simultaneously at two rooms. For a reasonable fee (of course).

Lillian: (hollering from behind her closed bedroom door) Do you want to know why I’m in here?

Lillian: Because I’m angry at you. You’re not getting me my waffles!

Me: I said I would get your waffles ready after I completed lunches for Henry and Mary Claire. (Thinking: Um, forgive me for being concerned about someone else’s nourshment.)

Lillian: Yes! That’s just what I mean! I want my waffles now! (Excuse me, but did I give birth to Varuka Salt?)

The same day, she told me she no longer wanted me to cut her grapes in half. Sort of like this, “Do you think you could actually give me grapes without cutting them?” When I presented the bowl of grapes she looked at them and said, “Wait. Now I can’t see the pretty insides. Will you take them back and cut them?”

Without a word I took them back. (Silently repeating a choose-your-battles mantra.)

When I returned the bowl of freshly sliced fruit she declared. “No, I guess I want them whole.”

There is no glue for grapes. And if there was, I might have used it for myself, because I was coming unglued.

The life lesson: Think before you cut your grapes. Or your baby brother will get them, and you’ll get nothing.

… it hits me that people are a little bit crazy.

Today, when pulling into the drive-thru at a fast food joint, someone blindly backing out of a parking spot, stopped abruptly. Turned to me, and waved me on while mouthing the word a**hole.

I was entirely perplexed. I wasn’t speeding, driving erratically, or anything worthy of a comment, let alone an expletive. I stopped. Cocked my head and stared at the driver for just a few seconds before proceeding. She was just a young woman.

I think she must have realized I was baffled by her inaudible outburst. My windows were closed, as were hers. She just sat there looking back. Her own voice ringing in her ears. I saw her face wash with embarrassment. Which it should have.  Then she quickly put her car in gear and zoomed out of the lot.

Not to be old-fashioned … but where has courteousness gone? Is it that parents don’t teach their children? Are we in such a hurry to get to the next place that we’re willing to speed passed anyone who slows down, even for a second. Or shout profanities at those who can’t read our minds?

Last week I watched a teenager picking up her brother at Henry’s school completely disregard the rules of pick up. Back up, take cuts in the line up, and zoom around other cars to get out while completely ignoring the halting hands of staff trying to direct the flow for the safety of the children. My kids gasped in horror. Who would do that? They wondered aloud. What’s wrong with her?

Okay, so my kids get it. They get the rules. They know about courteousness, traffic flow and societal order so that there can be freedom within that order (how Montessori-ish). But what will they do when they encounter the overwhelming flagrant disregard for the same rules by which they abide?

I don’t have anything clever to say on this one. I can’t really discount it, because I see it everywhere. I guess, I’ll keep doing my part and hope that enough parents are doing theirs. I’ll also continue to have faith that this is all part of God’s great plan.

That’s how long Richard and I have been married. Twenty-one years in December.

That’s also how far we got saying a family rosary tonight, before Lillian stormed out of the room, stomped her feet all the way to her room and slammed the door. Why? Because Cliff was whipping her with the rosary he was holding, and she wanted to lead every prayer.

Which is actually admirable.

But if you have to tell her everything to say in bite-size phrases, it gets a little cumbersome for everyone else. Distraction is inevitable. We decided to quit while we were ahead. Twenty-one Hail Marys amid kicking, whipping and screaming has to count for something.