You don’t have any intention of reinventing Advent – but you do need to breathe some life into the season around here.

I know, you’ve done wreaths, candles, Jesse trees, sung O Antiphons, hung O Antiphons, read scripture, colored calendars, you name it. You’ve got 20 years of Advent with kids under that belt and are searching for a fresh way to look at this seasonal gift called waiting.

I know you don’t want to revisit last year when you were later putting up the  tree in acknowledgement of the “real” Christmas season. But it felt like Christmas passed you by. Everyone else was taking down their trees, and you were just getting started without the benefit of Christmas music on the radio or decorations at the stores. The hat-wearing bell ringers at Kroger had long turned in their red buckets, and you had pockets full of change.

You arrived at the party just as everyone was leaving.

You were left standing in the picked-over Christmas clearance section of Walmart.

(I could come up with many more to continue to distract me from the point of this letter to you, I mean me. Whatever.)

So, what do you think is the actual benefit of holding off to celebrate Christmas and actually embracing waiting? There’s certainly no real outward point to be proved. You were just there in your own little house trying to stick with the program laid out for by the church year – whether you liked it or not. (That sounds dramatically dreary. Which it wasn’t at all. It was  a joyful season. Waiting included.)

So Advent-preparing me, I challenge you to this: Incorporate the joy of the upcoming season while meaningfully embracing the waiting of the soon-to-be-current season. Make it engaging for the littles and not overlooked by the bigs, and try to keep sane with both Advent and Christmas clutter.

What do you do when you buy a squash half as big as Batman? 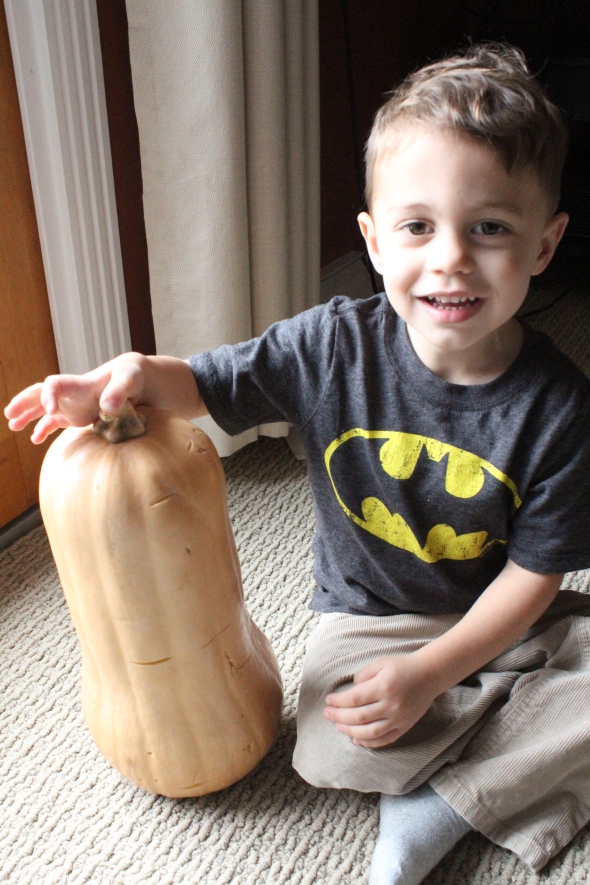 I bought this beautiful Butternut for a whopping $3 when I took the littlest ones on a field trip to the apple-less orchard. (This year’s apple crop in eastern Michigan was nil thanks to that nasty late freeze in the spring.) But the pumpkins and the squash were bountiful, so I loaded up before packing up the car with kids who were all sugared up on a fair share of those yummy fresh cinnamon-y donuts that only seem to exist at cider mills and orchards. 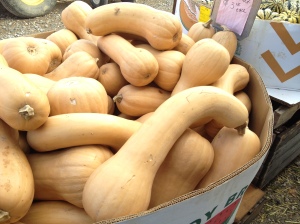 I should have put a human by that box to you can see how long that one squash is. That would be two-arm carry for sure.

The thing about a giant squash is, it’s giant. You have to put it somewhere before you’re ready to have at it, and when you are ready, you better make time. It takes a long time to slay the thick-skinned beast. You need a plan of attack and a really sharp, and strong knife. And a Butternut is not like a Hubbard squash. I have no qualms throwing an ugly monster Hubbard on the ground for quick breaking and not-so-quick roasting.

I peeled, sliced and diced for about 25 minutes. I don’t have top-chef knife handling skills, and I’d like to keep my fingers. So, speedy, I am not; but careful, I am.

That one big squash yielded enough meat to make a double dose of my favorite squash soup recipe from Greenfield Village’s Eagle Tavern, and a full 9×12 of baked squash with butter, brown sugar, lemon zest and nutmeg.

My only deviation from the Eagle Tavern recipe is that I used chicken stock instead of veggie, because that’s what I had on hand. 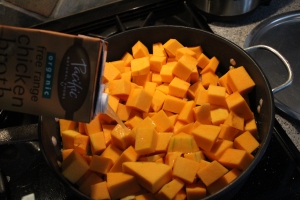 The most careful piece of advice I can give with that recipe – and all other squash soup and sauce recipes – is do not overcook the squash. The color seems to change from a soft orange to a more mustard brown. It also seems to diminish some of the “squashiness.” In other words – don’t boil that beautiful squash.

The soup was delightful, as always, and I shared it with anyone who would take it. As much as Richard and I love it, the kids, not so much. But, they did devour the baked squash, which carried us through a left-overs night, too.

I used about a 1/4 cup of butter, slicing it and just placing it evenly on the squash. Sprinkled with 2 T of brown sugar, a sprinkle of sea salt and then a light dust of freshly ground nutmeg. I covered with aluminum foil and baked at 350 degrees for about 45 minutes (until the squash could be easily pierced with a fork). Then I baked another 10-15 minutes uncovered, for a little more browning and bubbling. It came out perfectly.

I much prefer the convenience of smaller, dainty squash – not that a vegetable named squash can actually be considered dainty. But for the price and the energy, this squash was super.