Clifford is obsessed with throwing things away. And we’re pretty sure we realized this kind of late in the game. Who knows what has been set out at the curb at the hands our our little man.

Following a four-day vacation away from home, the very first thing that baby boy did after walking in the door was seek out things he could throw away. We all have our comforts of home, apparently this is his.

When I opened the lid of the trash can to put in a new bag, I found this. (Try not to get too distracted by my ultra cute shoes. ) 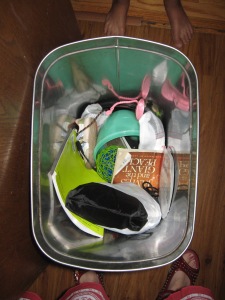 If he’s not throwing things in this trash can, he’s pushing it over for the pleasing effect the loud thud initiates. (You’d scream, too.) Or he’s trying to reach in it to see what treasure he can fish out. All too often, the can is relegated out of practical use and perched towering over all of us on the counter top.

As much as analyzing the trash several times daily is a rather arduous process, I actually appreciate his interest.

Today he spent about five minutes trying with all his might to throw a mop away. He’d lift the heavy long stick high over his head, put the handle in, only to have it swing back up and out of the can. He tried again and again. Finally, he switched ends and got it to stay. You know, until, he pulled the whole can over and down, startling all of us. Again.

Clifford’s continued interest in the trash demonstrates that at16-months old, he does not lack perseverance. As I watch him hunting and seeking things to put in his beloved shiny can, or trying over again with the mop three times his height,  I can’t help but wonder how this will translate into the kind of little boy, then man,  he will become. (I like to imagine it means he will naturally gravitate toward cleanliness. I can dream, can’t I?)

It’s true he’s a boy a of few words. Okay, almost no words. But he certainly is a little man of action. During the day, he rarely sits. He just goes. And goes. And goes. I would love to strap a pedometer on him just to find out what kind of ground he covers running back and forth in this house all day.

I do get to sit down with him a few times during the day, since recently he has taken a liking to books. He will happily sit through a story or two. Oddly, he’s not interested in the point-and-name type of picture books (unless it has something to touch). He much prefers Curious George’s adventures and will sit still through that or (help me) a Berenstain Bear story or two before he’d let me name or count pictures of butterflies in a board book.

Like his big brother, he’s interested in how things work. On his first ride on a carousel, we could barely get his attention to snap a photograph. He was so focused on the mechanics of the machine. Who cared about the horse and the music? He just wanted to see those gears turning. And as he watched, his gears were turning, too. Richard and I joked that we could see the smoke coming out of his ears. Cliff did acknowledge that the experience was fun with a short clap and a smile at the end of the ride. Reminding us, oh yes he is, after all, just a baby.

Another added joy is watching my husband so naturally respond to Cliff’s interests. Safely in his daddy’s arms, Clifford pushes the button to grind my coffee in the morning. He watches with interest as the dishwasher is loaded and unloaded, often with Richard’s direction, reaching in to spin the moving parts. The boy can’t get enough of the vacuum cleaner and its retractable cord, and there’s not enough time to explain his apparent fascination with electric tooth brushes. And Richard patiently demonstrates each item of interest to Clifford, all while wondering–like I–what goes on in that silent boy’s mind.

What this all means for this little baby boy is a mystery to me. I pray that we, as his parents, can nurture what truly interests him as he grows. In the mean time, I’m enjoying the discovery of yet another unique and miraculous gift from God, in the form of a little boy who I am blessed to call my son.

So, we’ll see what happens in the story of Cliff, still yet to be told, but one that is truly a joy to behold. (Oh no, too much Berenstain Bears!)

One thought on “Getting trashed”