“That was awesome!” Those are Lillian’s words to me after sitting through her first full-length ballet. After two hours of quiet from a girl who talks pretty much incessantly, THAT was awesome. 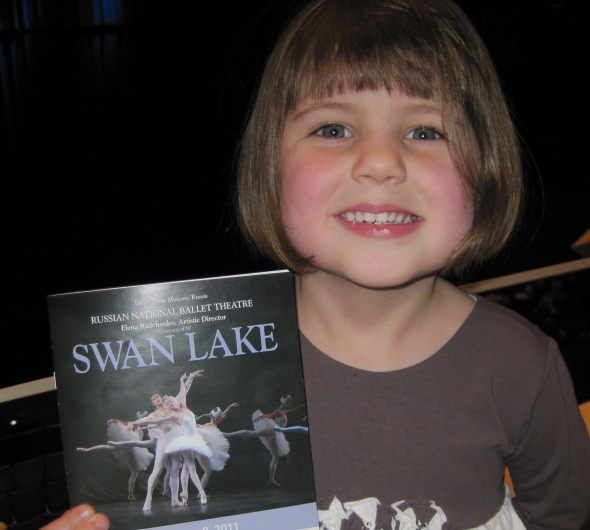 She was mesmerized by whole thing. Tickets to a performance of Swan Lake by the Russian National Ballet were given to us by a friend’s mom. Little did she know when offering tickets to us, that Lillian, at the tender age of four, is a Swan Lake scholar. Her love affair with the story began by chance.

It was the music that appealed to her first. After watching the Disney Sleeping Beauty  DVD (with a Tchaikovsky sound track), then two-year-old Lillian watched the special “documentary” about the composer that auto-started following the feature. Then came Barbie Swan Lake. (I know, we’re so highly cultured.) But that wasn’t enough. She wanted to hear all the music. So we played it. Then came Swan Lake books and CDs from the library. And then watching clip after clip on YouTube. She would hide behind a chair as she watched the “evil guy.” Critiquing the costumes and sets of the different versions. And as scared as she was at times, she insisted on watching, again and again. On her third birthday, she was gifted with a ballet tutu that has a recording of music from Swan Lake built into it. With a push of a button, her fancy fluffy skirt, and her beautiful imagination, she was transported to that enchanted lake.

I don’t think I would have thought of taking her to a ballet at this age. A musical maybe. The other kids were her age for that. But here was this lovely opportunity. We really made a date of it. We shopped for a new dress (thanks to after-Christmas sales). Went for a haircut. (Which she needed—but just added to the excitement of the day.) She ate lunch. Napped. And then it was time to go.

Our seats were front-row, center in the balcony. Perfect for a little person. The music began and so did the joy. She gasped at each leap. She occasionally raised her arms in imitation of the elegant and beautiful white swan Odette. Her jaw dropped at the lifts, and she was the first to clap to acknowledge skill. She was never lost in the story and didn’t miss a thing. She grabbed my arm and pointed to make sure I didn’t miss the times when Odette spied the Prince dancing with imposter Odile. And, by the way, the Odette and Odile were fantastic. Odette especially. But more than that, the experience was priceless.

The best part: her recall of the day. On several occasions, out of the blue, she’s looked at me with “love eyes” and said, “I loved my date with you.” 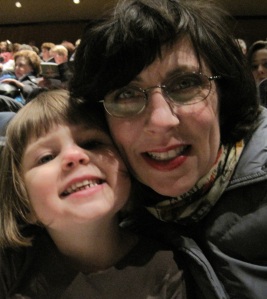 I loved it, too. It made me really appreciate the wonder of Lillian. Other than her recent interest in the process of waste disposal and local landfills (don’ ask), she hardly shows much grounding in reality. The same part of her that would hide MC’s video camera because of something she may have imagined, is the same part of her that made her able to enjoy so completely the fantasy world put before her on that stage. It wasn’t about suspension of reality. For her, what she saw was reality. Why wouldn’t it be? Swans dance. Princes spin. Jesters leap, and evil guys try to mess up everything. And her commitment to it all is beautiful. I know that without minds like hers, that kind of creativity and beauty wouldn’t exist, nor would there be a gasping, clapping audience to appreciate it. We should all embrace that part of ourselves a little more often, or at least try once in a while to see the world through the eyes of a child.

One thought on “Swan star”