For the past year, Mary Claire’s been attending an art class for homeschooled students at a local church. It’s once a month and is packed. There are usually at least 70 students, often more. The man who teaches the program is wonderful. The kids all work on the same picture. He guides them through the process and techniques involved step-by-step to draw a specific picture. It’s more about learning how to recreate something … which is good  a first step. The pictures they work on all have a Christian theme. He tells them some story through the process and keeps them totally engaged. Mary Claire loves it. And this month, for the first time, it was Henry’s turn to attend the class (now that he’s going to be eight).

Henry was excited. Or at least he expressed he was excited. That is, until the day actually came. I was packing them a snack and when Mary Claire ran upstairs to get her supplies, Henry approached me.

My boy has no misconceptions about his artistic talents. To him, a pencil’s greatest purpose is that of projectile. He hates writing. He hates drawing. Always has. Getting him to work on his handwriting is like pulling teeth. He does it. But not without complaint, pain and apparent agony.

“Henry, this isn’t a contest. This is about learning. You aren’t going there to create a masterpiece. You are going to learn a little about drawing, a little about God and a little about some other boys and girls,” I reassured him. “You have to a least try it, or how will you ever know?”

“We’ll see,” I said. I really had no intentions of letting him get out of it in the future. But, well, you know, we had to move on.

I took them to the class. Asked Mary Claire to show him how they check in, etc. She did, then immediately found a table that had only one vacant spot and slid into the empty seat. Henry marched to another table with five boys all in orange shirts. Brothers. Seven-year-old twins and nine-year-old triplets. I asked the boys to introduce themselves. They did … but their names could have all been the same. They all looked alike and the matching shirts didn’t help matters. Henry looked comfortable with the orange boys, so I quickly left.

After the class, Mary Claire and Henry were instructed to walk home. The church is only a block from our house. It was drizzling but they had umbrellas. When I first caught sight of them, Henry was carefully protecting his picture by holding it high up under the dome of his umbrella.

When he came in, he announced that his drawing was terrible, but he seemed to be beaming just the same.

“What did you think?” I asked.

I loved it, especially since it came from my I-will-never-willingly-hold-a-pencil-in-my-hand-unless-I’m-shooting-it-at-something boy and was complete with his own embellishments, including a whole row of smiley faces along the top of the picture, instead of the more predictable skull and crossbones (the God part must have rubbed off, too). I could tell he was proud of himself. And I was proud of him. I thought maybe this is just the break through he needed to feel a little more confident in writing in general. (I was wrong. He argued all through handwriting today, but I look at the picture on the fridge and know there is hope.) 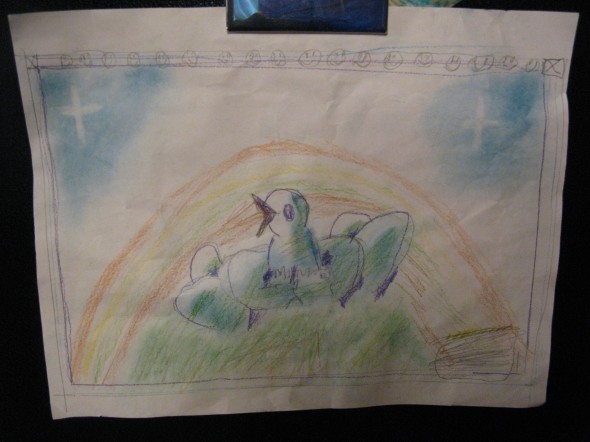 Henry’s break-thru (notice the pot of gold at the end of the rainbow).

One thought on “Break through”