Today is the feast day of St. Thérèse of Lisieux. She was the first saint that became real to me. 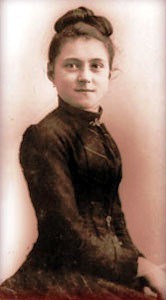 I encountered her in New York City one day when making a regular visit to St. Patrick’s Cathedral. At every chance I could while a student at Hofstra, I would travel from Long Island into the city. Even though I was a heavily loaded full-time college student, I took acting classes at HB Studio in the Village. Depending on how my classes fell during the day, I would try to make a trip up to St. Patrick’s. Sometimes I would hightail it up to the cathedral from Penn Station (about 23 blocks), then take the subway all the way back downtown to the studio. It was always worth the time and worth the trip. A good walk and a great God, what could be better?

For a time during that period, there was a traveling display about St. Thérèse of Lisieux. On one long side of the cathedral were life-sized photographs of this beautiful, sweet young woman. Who, in those photographs, was the same age I was at the time. I could stand there and look right into the eyes of a saint

. And although they were inanimate photographs, they beckoned me to learn more. And I did. She’s been my friend ever since. It wasn’t until relatively recently that I learned that as a girl my mom loved the sweet saintly Little Flower as she’s called. If you don’t know about her, I urge you to find out more. There’s a lovely movie about her life that is a family favorite around here. And here’s a nice article at today’s Faith & Family Live site.

St. Thérèse reminds me to find the joy in some of the minutia of the day. To remember that my troubles are small. My favorite quote is from her autobiography, The Story of a Soul.

And so it is in the world of souls, Jesus’ garden. He willed to create great souls comparable to lilies and roses, but he has created smaller ones and these must be content to be daisies or violets destined to give joy to God’s glances when He looks down at His feet. Perfection consists in doing His wil, in being what He wills us to be …

When I’m struggling with something that causes me grief or pain, and I have to fight to temper my own response, when God looks down at His feet, will he see me? Will I be a daisy, a violet? Frankly, sometimes, I’m a weed. Or worse a dandelion: a weed disguised as a flower. But by learning from those who have gone before like St. Thérèse and asking for their intersession, I’ll keep trying to grow and bloom.

2 thoughts on “A lot of help in her little ways”